It’s 6.45 AM as I’m writing this, listening to Radio Humberside and watching the snow fall on my garden in Barton-upon-Humber. For the past hour I’ve been following the news, updates from Twitter, and the reporting from live tidal gauges, trying to get an idea of the materialising image of this storm surge.

A storm surge occurs when low atmospheric pressure during storms causes the sea level to rise. This is because the low pressure draws up the water level. This is a basic explanation, but a 1mb reduction in atmospheric pressure will result in a 1cm increase in sea level. On top of the sea level increase caused by this, storms are usually windy and whip up significant waves, adding further level to the water.

To cause flooding, a significant surge needs to coincide with a high tide, usually a high spring tide like we are experiencing at the moment. If the surge coincides with the low tide, it results in nothing more than an unusually high low tide level but is not a risk. This page from the MetOffice provides a great description of them.

This combination was what drove the warnings for flooding along the East Coast of England this morning. Fortunately, the flooding feared did not occur. It is important for me to be very clear now that the main risk, and the flooding warnings for today, refer to the tide this evening – keep listening to the Environment Agency, do what they say, and keep an eye on their warnings here.

From the National Oceanographic Centre we can see forecasts for storm surges at tidal gauge sites. Below are the forecasts for today for the Immingham gauge – the peak surge is forecast to be over 2m. If this was to occur with the high spring tide due at Immingham this evening, over 7.4m, it could produce water levels in excess of 9.4m which would be higher even than 2013. Thankfully, the peak of the surge is forecast to occur prior to the high tide. This has happened numerous times in the past, where large surges have coincided with low tides. 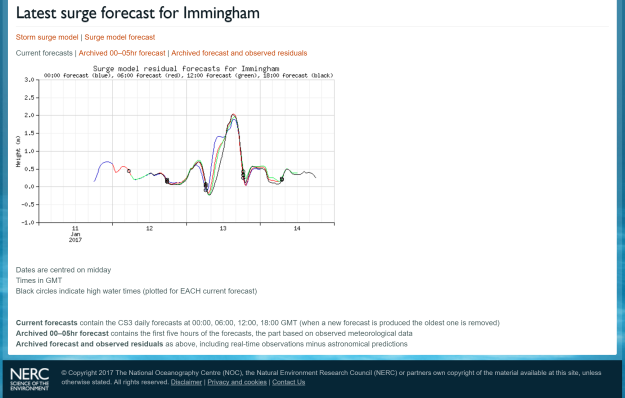 This does not mean there is no risk by any measure – the water levels this evening will be higher than this morning. This forecast could turn out to have predicted the timing wrong. Surges can also have the effect of drawing in the high tide, causing it to occur slightly early as demonstrated by Horsburgh and Wilson (2007) (Paywall). The winds forecast also did not occur this morning but the could arrive during the day, adding to the waves.

Storm surges are complex, with numerous facets combining to cause the risk. This makes them difficult to forecast and can evolve and change quickly. The Environment Agency have done a superb job is warning and preparing these past few days and should be commended for this work. It is also encouraging to see the greater appreciation for tidal flooding risk from the media and the public – awareness is vital component in reducing the dangers of flooding.

Recent high tides have taken their toll on Spurn, washing away the beach across the breach, leaving only a bed of loose gravel. It is now impassable even to the off-road 4×4’s used to ferry staff to and from ABP’s signalling station. 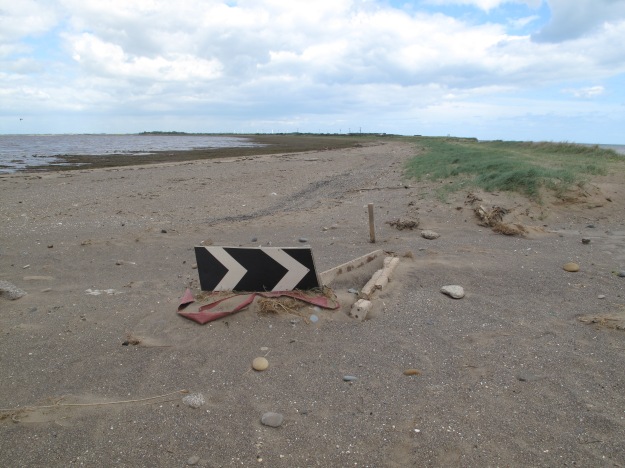 It has led to discussion in the local media over whether Spurn is still a spit, or is it more accurate now to call it an island. I don’t think we’re there yet, but the direction it’s heading it probably isn’t going to be long.

Now is a good time to revisit my blog post from the GEESology blog back in March this year. It was Part Four in a four-part blog looking back over the year since the December 5th 2013 storm surge.

This is the fourth and final installment of our mini-series looking back over the year since the 5 December 2013 storm surge, which flooded many areas in the Humber Estuary and along the east coast of the UK…“

Today the National Trust released their report – “Shifting Shores : Playing our part at the coast” – you can read the BBC’s coverage of it here. The main message from the report is stark – the UK is ignoring the risk of coastal erosion and flooding, and the threat of rising sea levels. They also advocate for increased investment in soft, or natural, coastal defences, and highlight successful schemes.

For the Holderness Coast this is particularly acute, with it often claimed to be “Europe’s fastest eroding coastline”. Whether enough is being done to protect it is a matter of opinion – to protect the whole length from any erosion just isn’t practical, but this is little comfort to those who live in view of the North Sea. With this area beyond the realms of my previous study, I am unsure of the plans and policies in place to address future coastal erosion and flooding along this stretch of coast.

Further down, the breach in Spurn Point is a sharp reminder of just what the sea can do to hard defences we have put in place. Some would argue that the natural environment is being restored here by the sea, but the long-term impact of leaving Spurn to its fate is simply not known – it isn’t, however, being ignored.

In the Humber Estuary itself, probably beyond the intended scope of the National Trust report, the risk of coastal flooding became all too apparent on December 5th 2013. Before then the Humber Flood Risk Management Strategy had already been put in place by the Environment Agency, and work is under way to review this based on the lessons learnt on that night. This plan details the steps to be taken to ensure the Humber’s defences are improved and keep pace with raising sea levels, and rightly involves a sensible mix of soft and hard defences.

If you want to learn more about flood risk and sea level rise in the Humber Estuary, try Humber in a Box here.

To learn more about your flood risk and to sign up for flood warnings, visit the #FloodAware website, here.

So, the many thousands of abstracts for the American Geoscience Union’s Fall Meeting have been judged, and I have been handed a Poster and an Oral Presentation spots. If you’re in San Francisco for the meeting and would like to chat about my research, just hunt me down.

“Humber-in-a-Box : Gamification to Communicate Coastal Flood Risk in the Face of Rising Seas”

I’m really looking forward to getting out there and showing off my research to the biggest event in our circles. I’m also really excited about talking about Humber-in-a-Box for the first time too, and seeing all of the other presentations in the Amazing Games session.

Hope to see you there!

A couple of weeks ago Tom took his new PhD student, Chloe Morris, out around the East Riding Coast and the Humber to scout out potential future field sites – I was invited to tag along, so I did. Chloe has joined us, working with the Environment Agency and the British Geological Society, to advance the work myself and others have done with Dynamic Humber in trying to understand how the future of the Humber is linked with the future of the Holderness Coast – people seem t be surprised to find that the sediment in the Humber predominantly comes from the coast and not from the rivers. 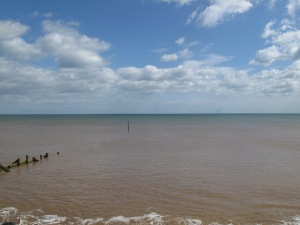 The first stop was Withernsea. The photo above shows Tom and Chloe looking over the southern extent of the hard defences for the town – the cliff beyond has eroded several metres back from the line of this defence. The Holderness Coast is often said to be the fastest eroding coastline in Europe, as the till left behind by glaciers as the last ice age ended is broken up and washed away by waves and storms.

From Withernsea, and all along the coast you get a view of vast offshore windfarms being built in the North Sea. 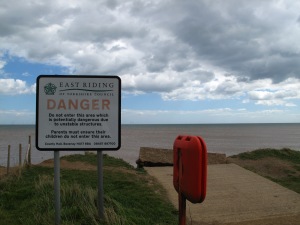 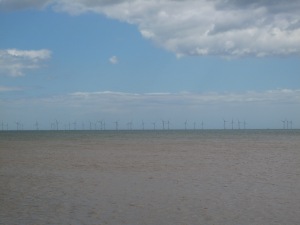 Roads and paths that just disappear over cliff are a common sight, as are more of the offshore windfarms. 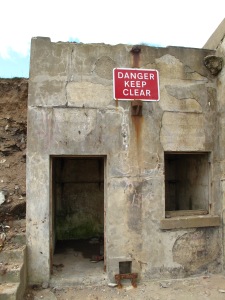 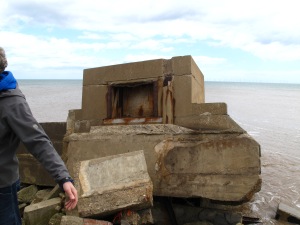 Further down the coast you get a sense of the history that gets lost to the sea. There are dozens of towns and villages that appear on maps and in records that are no longer there, but here it is second World War military defence structures being broken up and washed away. I think it is a real shame that we are losing these. 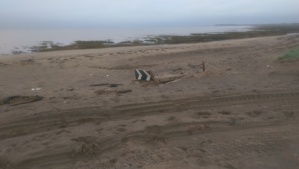 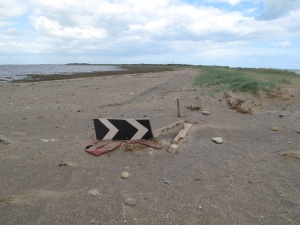 No trip around this area would be complete without visiting Spurn. This is a most interesting and dynamic site and there is a lot of potential for interesting science to be done here. The photos above were taken six months apart, the left in November 2014, and right on our trip, May 2015. The sign is valiantly holding on, but the area looks to have lost some height and the ground is visibly more pebbly. 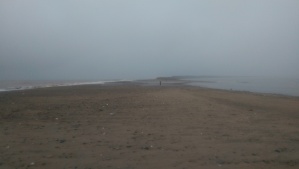 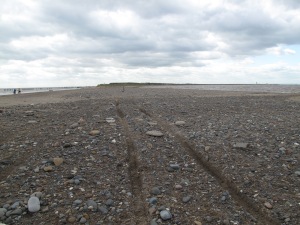 Again, the two photos above were taken six months apart on the same dates as the road sign. In November there was a clear lip on the seaward side, and a shallow dip down towards the estuary side, yet in May the beach across the beach site was clearly flatter, and with lots more and larger pebbles. There is a lot going on here! Time to get the terrestrial laser scanner out again.

From here I went on to break a chair and remind myself I really need to be stricter with my diet… so after picking up pork pies from a local bakery, we headed to sites on the Humber. 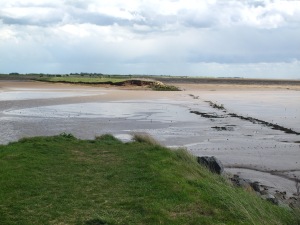 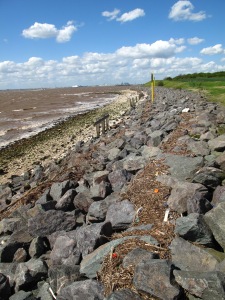 Paull Holmes Strays is what is called a Managed Reallignment site. It’s where an area of flood defence is deliberately breached, with new walls built further back, so that water will inundate the area during a high tide. This creates a new salt marsh habitat populated by birds and other wildlife. It also acts as a flood defence as it stores water during unusually high levels. The image on the left above shows one of the two breaches at the site, and the right shows collected debris on the estuary facing wall, indicating the height of a past event (possibly the 5th December 2013 storm surge). 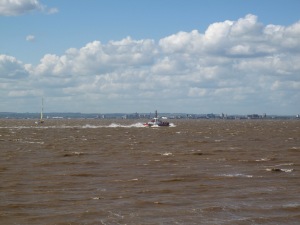 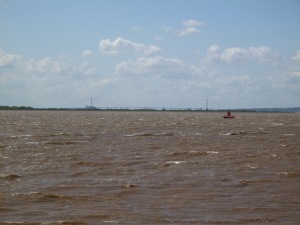 Although I have studied it, looked at it on aerial photographs, through LiDAR data, and even modelled it, I have never visited the site – I was pleasantly surprised to find it affords you some glorious views over our estuary, including a seaward view of Hull, and a great view side on of the Humber Bridge. From here we headed to the “Jewel of the South Bank” – Barton-upon-Humber. 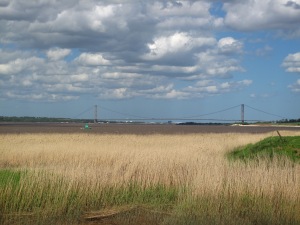 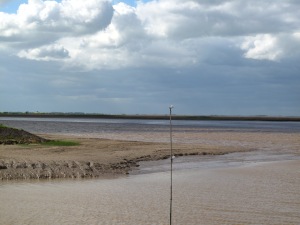 Here we headed to the end of the Far Ings Nature Reserve and found the Chowder Ness Managed Reallignment site. This intersects a footpath I used to use a kid to walk between Barton and South Ferriby. Here you can get a view of the other side of the Humber Bridge. Our last stop was South Ferriby, where we looked at Reed’s Island. I’m sure I’ll write a post in the future about Reed’s Island, it has an interesting (if maybe not true) history.