It is has been a busy week so far, preparing Humber in a Box and River in a Box (no relation) for the Hull University Science Festival. The University has put out a press release for Humber in a Box and there’s been a bit on interest in it – I’ll be doing my first ever media interviews tomorrow which is very exciting. I should note that although I led on Humber in a Box, I wouldn’t say I created it – it is merging of Professor Tom Coulthard’s CAESAR-Lisflood model with the Unity-3D gaming engine, and this was done by the SEED students. 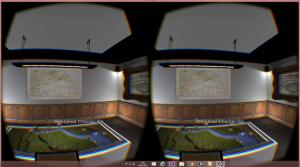 Screenshot of Humber in a Box

You can come along and try Humber in a Box on Saturday (21st March 2015) by coming to the main marquee for the Science Festival. There will be plenty more to see there too, it promises to be bigger and better than last year, and the 2014 Festival was brilliant.

In a quirk of excellent, yet unintentional, timing, my GEESology blog about serious games came out earlier today, which features Humber in a Box and my reasoning behind it. I look at why games, and gaming technology, can be used to improve teaching and communication for science, in particular the GEES subjects (Geography, Environment and Earth Sciences, don’t forget). There are some great links to other serious game projects too.

“Let’s get serious… and game!

Writing this blog post comes at an exciting time for me. I’ve been working on a project called ‘Humber in a Box‘ with a group of student developers from SEED (a software development group at the University of Hull), and it is going to make its debut at theHull University Science Festival this coming weekend. Humber in a Box represents a start for me at looking at using gaming technology and ideas to better communicate research, and I am going to use this post to explain the ethos behind this…”