Today has been a good day (so far). This morning I received the Oculus Rift headset, the first piece of dedicated kit for SeriousGeoGames (SGG). I’ve even managed to get the Humber in a Box demo running on it and been having fun playing around in the virtual environment.

Humber in a Box was also featured in an article by Phil Harris on BleedingCool.com where I chatted to him about what I am trying to do with SGG, what Humber in a Box is all about, and generally how gaming tech can be used for industrial and educational applications. You can view the article here.

Don’t forget that you can follow the progress of SGG and Humber in a Box on Twitter. 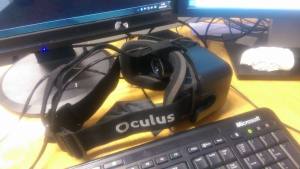 Trying to resist playing with the new toy…